Commercial air travel safety could see significant improvements thanks to a breakthrough in aircraft flight control technology from researchers at the University of Illinois at Urbana-Champaign. 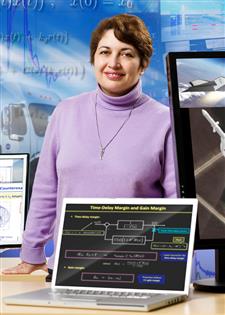 Dr. Naira Hovakimyan
“Predictable, reliable, repeatable, and safe: These four response criteria define a successful flight control system—and could set the stage for certification by the Federal Aviation Administration,” explained Naira Hovakimyan, a professor of mechanical science and engineering at Illinois. Her research team in the Advanced Controls Research Laboratory has successfully tested Hovakimyan's L1 adaptive control technology for the first time on a manned aircraft—representing an important step toward the introduction of the technology into commercial aviation.

“The flight control system is, perhaps, the soul of an aircraft—it consists of the necessary operating mechanisms to control its actions and direction in flight,” Hovakimyan said. “The flight control systems on today’s commercial aircraft have been tested and matured for decades and are considered very safe for the millions of passengers traveling on airplanes every day. But despite their safety, there is still great need for new technologies that could prevent more accidents.”

While in flight, the jet was injected with seven different failure configurations, including shifts in the center of gravity and changes in aerodynamic parameters. Particularly challenging were the configurations reproducing lifting body aerodynamics and the F-100 Sabre dance, both of which have aggressive tendencies to adverse pilot-aircraft interaction. In all failure configurations, the L1 control system was able to override the problem and maintain predictable and safe handling with consistent and uniform performance.

“In the presence of failures, the L1 controller was able to recover aircraft performance to a point where pilots were comfortable flying the jet, with really minor adjustments to their standard piloting techniques. Remarkably, the evaluation showed that aircraft handling was quite consistent across failure configurations, a critical feature for flight safety,” said postdoctoral research Enric Xargay, who worked on the project with graduate students Kasey Ackerman and Ronald Choe.

After just two days of testing above 10,000 ft., the evaluation team deemed the system safe for low-altitude flight, and executed a total of eight touch-and-go landings with the L1 controller engaged, with and without injected aircraft failures.

The results from these in-flight evaluations are consistent with previous tests by NASA using subscale research aircraft. As part of the AirSTAR project, NASA funded several research groups across the country to develop and test flight control technologies on their variable-stability Generic Transport Model aircraft. Of all the groups, only nine controllers, based on simulation evaluations, qualified for flight testing. Of those nine, the L1 adaptive flight control system from Hovakimyan’s group was the only one cleared by pilots for stall and post-stall flight conditions, and the only one able to provide a predictable and reliable response over the entire flight envelope.

All of these flight tests serve as in-flight validation of the underlying mathematical theory, which provides guaranteed, consistent, and uniform performance, regardless of the nature of the failure configuration.

The implications for both airplane safety and new aircraft R&D are dramatic. 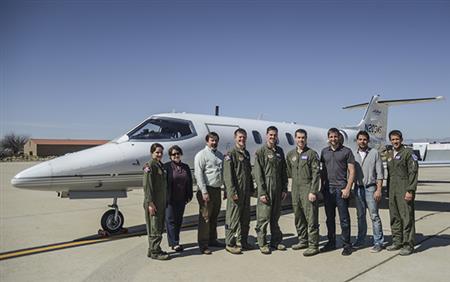 The L1 controller testing team (l-r) Captain Margaret “Sass” Blackstun, Naira Hovakimyan, Christopher Cotting, Captain Timothy “Speed” Lau, Captain Robert “Spike” Jeffrey, Captain Shawn “Demon” Stephens, Kasey Ackerman, Enric Xargay, Captain Paul “Rush” Fulkerson.
“We know how much uncertainty the L1 controller can handle before we leave the ground,” said Chris Cotting, USAF TPS master instructor. “For this type of work, that’s actually a really big deal. Also, with the L1 system, you don’t need the extensive wind tunnel testing that all new planes undergo. If you can give it a couple of points along the way, it can sort everything out.”

“When we were developing this theory between 2004 and 2008 at Virginia Tech with postdoctoral fellow Chengyu Cao (now on faculty at the University of Connecticut) with funding by the Air Force Office of Scientific Research, we were very rigorous from the beginning, ensuring that every assumption we put forth was realistic and could be verified. We vowed never to aim for a perfect cancellation of the uncertainties—because there will never be a perfect technology with unlimited opportunities. Every technology has limits within which it can operate. So we formulated the problem to fit into the imperfect reality,” said Hovakimyan.

Her ultimate goal is to see the major airlines adopt this technology as a backup flight control system. “If anything goes wrong, this would kick in. If there’s one switch that a pilot can turn on when the aircraft is in trouble, I want to see that happen,” said Hovakimyan.

Additionally, IntelinAir, a startup company developing next-generation UAS (unmanned aerial system) platforms, recently licensed the technology from Illinois for use in UASs marketed to farmers and the agriculture industry—a move that demonstrates the versatility of the technology in industries beyond aerospace and general aviation.

The L1 flight control system was extremely helpful during high-workload evaluation tasks, but it also assisted the pilot during basic tasks, such as keeping the wings level while trying to find and look at rating scales. __________________