The second law of thermodynamics tells us that all systems evolve toward a state of maximum entropy, wherein all energy is dissipated as heat, and no available energy remains to do work. Since the mid-20th century, research has pointed to an extension of the second law for nonequilibrium systems: the Maximum Entropy Production Principle (MEPP) states that a system away from equilibrium evolves in such a way as to maximize entropy production, given present constraints.

Consecutive snapshots of the sample illustrating the formation of nanotube chains. The distance between electrodes is 1 cm, applied voltage is 400 V, and the series resistor is 100 MOhm. Panel (a) demonstrates the photograph of the ER fluid before the voltage is applied and the schematic of the experimental setup. The following photographs are taken after 45, 90, and 1500 seconds of interaction with the electric field. Originally printed in Scientific Reports, 5, article number 8323, doi 10.1038/srep08323. Reprinted with the permission of the authors.
Now physicists Alexey Bezryadin, Alfred Hubler, and Andrey Belkin from the University of Illinois at Urbana-Champaign, have demonstrated the emergence of self-organized structures that drive the evolution of a non-equilibrium system to a state of maximum entropy production. The authors suggest MEPP underlies the evolution of the artificial system’s self-organization, in the same way that it underlies the evolution of ordered systems (biological life) on Earth. The team’s results are published in Nature Publishing Group’s online journal Scientific Reports.

MEPP may have profound implications for our understanding of the evolution of biological life on Earth and of the underlying rules that govern the behavior and evolution of all nonequilibrium systems. Life emerged on Earth from the strongly nonequilibrium energy distribution created by the Sun’s hot photons striking a cooler planet. Plants evolved to capture high energy photons and produce heat, generating entropy. Then animals evolved to eat plants increasing the dissipation of heat energy and maximizing entropy production.

In their experiment, the researchers suspended a large number of carbon nanotubes in a non-conducting non-polar fluid and drove the system out of equilibrium by applying a strong electric field. Once electrically charged, the system evolved toward maximum entropy through two distinct intermediate states, with the spontaneous emergence of self-assembled conducting nanotube chains.

In the first state, the “avalanche” regime, the conductive chains aligned themselves according to the polarity of the applied voltage, allowing the system to carry current and thus to dissipate heat and produce entropy. The chains appeared to sprout appendages as nanotubes aligned themselves so as to adjoin adjacent parallel chains, effectively increasing entropy production. But frequently, this self-organization was destroyed through avalanches triggered by the heating and charging that emanates from the emerging electric current streams. (Watch the video.)

“The avalanches were apparent in the changes of the electric current over time,” said Bezryadin.

Following avalanches, the chains with their appendages “wiggled,” resembling a living thing, similar to an insect. 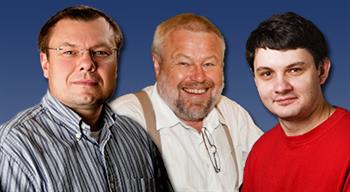 (l to r) Professor Alexey Bezryadin, Assoc. Professor Alfred Hubler, and Postdoc Andrey Belkin
“Toward the final stages of this regime, the appendages were not destroyed during the avalanches, but rather retracted until the avalanche ended, then reformed their connection. So it was obvious that the avalanches correspond to the ‘feeding cycle’ of the ‘nanotube inset’,” comments Bezryadin.

In the second relatively stable stage of evolution, the entropy production rate reached maximum or near maximum. This state is quasi-stable in that there were no destructive avalanches.

The study points to a possible classification scheme for evolutionary stages and a criterium for the point at which evolution of the system is irreversible—wherein entropy production in the self-organizing subsystem reaches its maximum possible value. Further experimentation on a larger scale is necessary to affirm these underlying principals, but if they hold true, they will prove a great advantage in predicting behavioral and evolutionary trends in nonequilibrium systems.

The authors draw an analogy between the evolution of intelligent life forms on Earth and the emergence of the wiggling bugs in their experiment. The researchers note that further quantitative studies are needed to round out this comparison. In particular, they would need to demonstrate that their “wiggling bugs” can multiply, which would require the experiment be reproduced on a significantly larger scale.

Such a study, if successful, would have implications for the eventual development of technologies that feature self-organized artificial intelligence, an idea explored elsewhere by co-author Alfred Hubler, funded by the Defense Advanced Research Projects Agency.

“The general trend of the evolution of biological systems seems to be this: more advanced life forms tend to dissipate more energy by broadening their access to various forms of stored energy,” Bezryadin proposes. “Thus a common underlying principle can be suggested between our self-organized clouds of nanotubes, which generate more and more heat by reducing their electrical resistance and thus allow more current to flow, and the biological systems which look for new means to find food, either through biological adaptation or by inventing more technologies.

“Extended sources of food allow biological forms to further grow, multiply, consume more food and thus produce more heat and generate entropy. It seems reasonable to say that real life organisms are still far from the absolute maximum of the entropy production rate. In both cases, there are ‘avalanches’ or ‘extinction events’, which set back this evolution. Only if all free energy given by the Sun is consumed, by building a Dyson sphere for example, and converted into heat then a definitely stable phase of the evolution can be expected.”

“Intelligence, as far as we know, is inseparable from life,” he adds. “Thus, to achieve artificial life or artificial intelligence, our recommendation would be to study systems which are far from equilibrium, with many degrees of freedom—many building blocks—so that they can self-organize and participate in some evolution. The entropy production criterium appears to be the guiding principle of the evolution efficiency.”
___________________