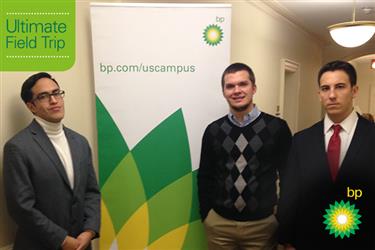 (l to r) Ivan Villamar, Patrick P. Regan, and Sean Ebihara
Participants in the 2015 contest were asked to identify and develop a novel technical solution to reduce the amount of water used and find an effective use for water produced by drilling operations.The winning teams, from seven top universities across the country, will now advance to the national finals at BP’s U.S. headquarters in Houston in April.

Now in its third year in the U.S., the UFT competition is one of the many ways BP works with universities to support STEM education initiatives and provides students with opportunities to explore energy industry careers.

“BP believes that addressing America’s energy challenges requires long-term partnerships between the private sector and leading educational and scientific institutions,” said Khymberly Booth, U.S. university relations director for BP. “The UFT has proven to be a fun and effective way to do just that.”

The grand prize winner of the U.S. competition will join the winning teams from Ultimate Field Competition contests in the U.K., Canada and Angola on a two-week field trip to BP’s natural gas operations in Trinidad and Tobago.