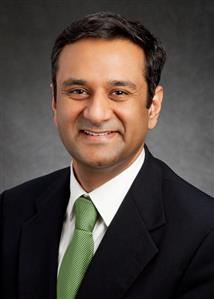 “I couldn’t figure out why I was there and why I was taking these abstract courses,” he remembered. “The first-year courses were completely uninspiring. It was not until I got into courses within my major that I realized I needed all that knowledge.”

Bhargava has set out to challenge the current model of undergraduate education, which typically includes four years of classroom instruction, a few internships, and a research experience. Along the way students figure out how to apply what they’ve learned and are sent out into the workforce or perhaps first graduate school.

“We started asking, ‘What if from the beginning, you have a coherent backdrop of an inspired grand challenge where you can put the concepts of classroom learning into the context of your own interest?’” he said.

To that end, Bhargava is leading a pilot “Cancer Scholars Program” within the College of Engineering in which he puts into practice a “challenge-inspired education model.” Instead of students going through studies and eventually applying learning into the workforce, the students within the program are taking what they are learning and looking at it through a prism of cancer research from the beginning.

“What we’re trying to do is provide intrinsic motivation in the student by using a challenging social problem that they might be excited about,” Bhargava said. “We chose cancer because it affects one out of every two Americans. It’s a great societal problem, a complex scientific problem and has tremendous implications if we can do something about it. Despite decades of research, the results against cancer are not as dramatic, and the pace that we had hoped. Engineers have traditionally not tackled cancer as a topic, so maybe if we bring new people to this problem, we can have some impact.” 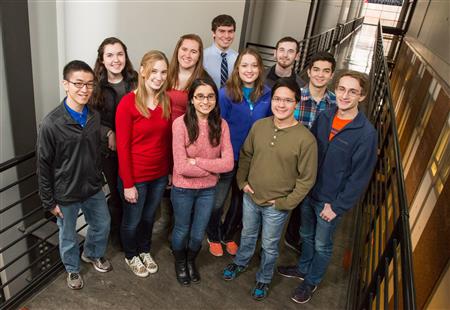 The first group of Cancer Scholars begin their research experience during the spring semester.
The cancer scholars will take the same courses as the rest of the bioengineering majors, but there is an additional overlay of experiences where these students will consider how what they are learning pertains to cancer.

As freshmen, they are taking “Frontiers in Cancer Research,” a new course in which students learn different complex problems at the frontier of cancer research as well as the application of their education to potentially solving these problems (such as engineering design, engineering method or specific courses later in their curriculum).

“The idea here is to get students to start thinking of the real questions in this field,” Bhargava said. “If they can start to ask questions with some systematic thinking process (the engineering method), then we will be successful and have students better motivated and focused on the education we can provide within the College.”

Students are required to choose a research advisor during the fall of their freshman year and start in the lab during the spring semester. During the summer, they will go through a “research boot camp,” where they will learn about design of experiments and ethical conduct.

As a sophomore, they will take another proposed course called “Healthcare Innovation by Engineering,” learning various facets of technology, policy and economics of healthcare, how technology can change the game and how ethics play a part in those decisions. Following their sophomore year, they will experience a clinical or industry immersion experience before spending their junior year planning their senior design project. This is a preflight course consisting of risk analysis, applying the proper engineering method to a problem.  They will start the design process in the summer before their senior year.

“The reason for getting started so early on their senior designs is that we don’t believe that innovation in this space happens by suddenly hoping to have a brilliant idea,” Bhargava said. “It has to be based on very strong scholarship over a number of years.”

During their senior year, they will finish with a capstone track based on their next career step, such as graduate school, a start-up, or a clinic.

Bhargava believes the challenge-inspired undergraduate model treats the College experience as an education, where students fully develop how to think, communicate and design, instead of simply gaining technical skills for a job.

“All of our students hope to impact the world in a positive way,” Bhargava said.  “The key problems are how they going to have this impact and how we are preparing them to do so. These are the questions we started asking and that led to the genesis of the program. In this paradigm, we ask students what they are interested in from the beginning and tailor the education the best we can to that interest. We want to provide a parallel support system to this linear system of pure research and pure training. We are trying to fill in the gaps.”

In deciding on the specifics of the Cancer Scholars Program, Bhargava’s team also had to make sure the program could be done to scale, didn’t increase the time to graduate, and could be done without having to overhaul curriculum.

Bhargava presented his idea at the recent AE3 “Past, Present, Futures” Workshop on campus and received interest from other disciplines hoping to perhaps apply the concept within their departments. If successful, he can also see it applied to other topics within bioengineering such as computational medicine and genomics was well as broadly across the College in other areas.

“This model of education strikes a chord with faculty and students alike,” Bhargava said. “The topic can be switched, but the framework kept consistent.”

Bhargava believes the timing of the program is right with the continuing emergence of engineering into medicine, which promises to accelerate progress in cancer research. The impact of this educational model will not be limited to providing exciting opportunity for students, but can truly impact the motivating problem as well.

“Cancer is an engineering problem on many levels,” Bhargava points out. “From diagnosis with MRI or ultrasound to treatment where we can target the delivery of drugs to specific nanoparticles and finally supporting the 14 million cancer survivors in the United States alone who need monitoring.

“We haven’t approached this problem in the same way that we’ve approached cell phones or computers for example,” he concluded. “Those kinds of advances have not come to bear in the cancer arena, partly because they haven’t been ‘engineerized.’ It’s a huge challenge. We really do need engineers in this space and this is one way we hope to push for change.”

If you have any questions about the College of Engineering, or other story ideas, contact Mike Koon, writer/editor, Engineering Communications Office, University of Illinois at Urbana-Champaign, 217/244-1256.